Greta Thunberg became the face of climate action when the Swedish teenager crossed the Atlantic by boat last year for the UN Climate Summit in New York. With her popularity came the term flygskam, also known as “flight-shaming.” Flygskam suggests that travelers should avoid airplanes due to the greater environmental consequences of flying, as compared to other means of travel. While this remains a controversial point, the concept is a vivid example of how sustainable travel considerations have become important in the minds of an increasing number of travelers.

This shift was studied by STR in a survey of 1,000 world travelers to “evaluate their thoughts and behavior towards sustainability in the tourism industry.” The survey revealed that almost 50 percent of respondents felt choosing an environmentally friendly vacation option was important to them. Of the remaining respondents, 40 percent were neutral on the topic, and only about 10 percent admitted to not thinking it important to consider the environment when choosing where and how to vacation.

At the same time, 37 percent of respondents stated that they find it difficult to know how to be environmentally friendly when traveling. 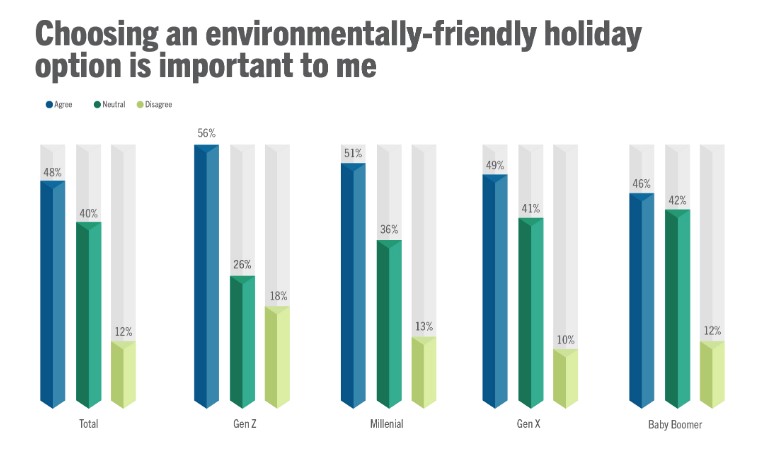 Survey respondents stated that they were far more environmentally friendly at home than on the road. Fully 92 percent said they were concerned about climate change. Ninety percent responded that they recycle at home, while 85 percent said they are minimizing single-use plastic consumption; 67 percent buy locally grown food regularly.

Despite years of sustainability efforts in the travel sector, 60 percent of respondents stated that they see little to no effort by hotels and accommodation providers to implement sustainable practices. Other travel operations, such as cruises, train services, airlines and bus tours, were also perceived poorly in regard to sustainability practices.

More than four in ten respondents (43 percent) said they would support a hotel’s decision to stop offering breakfast buffets to reduce food waste.

When it came to paying for heightened sustainability efforts, results were mixed. Some respondents said they were willing to pay more for an environmentally friendly option, but others prioritized cost or other aspects of the travel experience.

From attempts to reduce food waste in hotels to bans on plastic water bottles in some airports (see here) and even carbon off-setting initiatives within the airline industry, the travel industry has made significant strides toward greater sustainability. Consumer support for such initiatives will encourage the industry to continue to keep sustainability in their action plans.

A practical, easy way to get started is to check out Skycanner, the popular flight search engine, which has recently implemented a new feature that labels flights which emit less CO2 as a “Greener Choice.” 2020 has been touted as the year of sustainable business. So, why not consider what you can do to help make 2020 the most sustainable travel year yet?